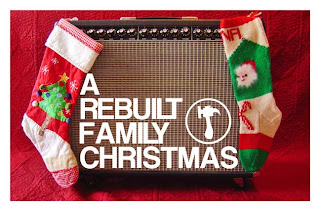 Couldn't make it out to the Melting Point in Athens on December 4th, 2008 for "A Rebuilt Family Christmas?" No worries... we're podcasting most of it. It's a little rough around the edges, but then again, so are we.

Part One features:
Jon Black: "Christmas Makes Me Happy"
Jim & The Beanstalks: "Let It Snow"
The Warm Fuzzies: "I Want An Alien For Christmas" and "The Grinch"
Micah Dalton: "Merry American Christmas"
Nathan Angelo: "Have Yourself A Merry Little Christmas/Christmas Song" medley Part Two of "A Rebuilt Family Christmas" is now available for free download - right click here to download the file (20 megs or so), here to listen online, and here to subscribe to the Rebuilt "Starving Artist" podcast through iTunes.

Here's the second half of the Christmas show:
Jonathan Rich & Natalie Moon: "Come Thou Long Expected Jesus"
Micah Dalton: "O Little Town of Bethlehem"
Ryan Horne: "Silent Night"
Jon Black: "What Child Is This?"
Natalie Moon: "I Wonder As I Wander" & "Do You Hear What I Hear?"
Jim & The Beanstalks: "God Rest Ye Merry Gentlemen/We Three Kings"
Paul Reeves: "Angels We Have Heard On High"
Pilot Coat: "O Come, All Ye Faithful"
Everyone: "Hark, the Herald Angels Sing" and "We Wish You A Merry Christmas"

Posted by Jason Harwell at 6:42 AM No comments:

How was the Christmas Show?

** For the sake of full disclosure...we were at the Rebuilt Family Christmas Show on Thursday night, and our waiter told us there were "no plastic cups" to be found at the Melting Point. He brought Molly's water in the JD cup. (I'm just glad she can't read...but we did get a hilarious picture out of it.)


Posted by Jason Harwell at 5:45 PM No comments:

If you're in the Athens, GA area tomorrow night, I'd love for you to join us at the Melting Point for the 2nd Annual Rebuilt Family Christmas show featuring just about every Rebuilt artist, and a slew of other people we call family delivering tidings of good cheer and their own renditions of familiar (and not so familiar) Christmas tunes. Last year, we had a blast, and we're looking forward to an even better show this year!

Here's the lineup (besides me, of course):

We're shooting video and capturing audio, but there really ain't no substitute for being there - hope you can make it!

I think I've mentioned this before on this blog, but to this point I haven't really elaborated on my most recent musical endeavor, the Warm Fuzzies. Today is special, so allow me a few words about the project.

I have always appreciated the little twists and turns in our lives that make things interesting. It never fails that when you least expect it, something bizarre, funny, ridiculous, or even horrible happens, and it reminds us that our best life plans may or may not even come close to what will really occur in our lives.

More to the point, my favorite band of all time is Weezer, partly because their first two albums are absolutely amazing, but mostly because I was in high school when those albums came out, and I have all kinds of emotional attachments to those songs. The best Weezer song of all time, by the way, is "The World Has Turned And Left Us Here" from the Blue Album. It's got that sweet, crunchy powerpop heft, but the acoustic guitar and love-lost lyrical content makes it feel both happy and sad at the same time. "Wistful," you could say. That's how I feel a lot - a sadness that things everyone I know and love is getting older and closer to death but an excitement and joy that we're all living out our days together in community. A little morbid? Let's move on...

So needless to say, Weezer's first two albums have had a huge impact on the music I love and the music I've always loved to play. In college, I picked up the acoustic guitar to avoid annoying everyone in my dorm, and for the next few years, it was the predominant instrument. I guess it still is, as I write most things on the lovely J-45 my even more lovely wife Jana gave to me as a wedding gift. But I always wanted to play some loud rock and roll, and thanks to the wonder of Myspace, I got the chance.

As it turns out, there was a man here in Athens who had also always wanted to play in a synthy powerpop band, and he came across some of my old "Flavor of the Week" songs and heard the first version of "Hey, Milunka" which was my blatant attempt at writing a Weezer-style tune. After exchanging emails, we started getting together regularly and writing songs, and over a year later (now with a full band and a handful of shows under our belts), here we are releasing our first recording, The Bubblegum EP today.

It's been a labor of love, and it's taken us the better part of a year to record it since we were tracking songs in our spare time. Jason Martin of Starflyer 59 mixed and mastered the disc, and since everyone in the band has graphic design in their veigns, we completely geeked-out on the packaging. The disc itself actually has a scratch and sniff coating that smells like bubblegum, and it comes in an eco-friendly recyclable cardboard "Bazooka Joe" style case with comic strip liner notes. We're really proud of how it turned out.

From the get-go, we have made a commitment to having fun with the Warm Fuzzies. We don't expect that we will ever play to thousands of people, and there may not be thousands of people who would really dig what we're doing. And that's cool, it's not really for everyone, I suppose. But just like my last days in art school when I got tired from everyone being so angst-ridden and depressed all the time, I think sometimes you just want to turn the amp up and kick out some jams about close talkers, Eastern European penpals, and robots. We've got a lot of anxiety these days, but it's good to remember that laughter adds years to our lives and makes things bearable.

If you'd like to hear the EP, you can stream the whole thing at thewarmfuzzies.com, and if you'd like to have your own CD that smells like bubblegum, you can also order one there, too. They make good stocking stuffers.

And if you're in Athens and you don't have anything to do tonight, we're playing our official release show at Caledonia with Jonathan Rich of the Goodfight and Farewell Flight of Harrisburg, PA. Doors are at 10, it's 18+ and $5.
Posted by Jason Harwell at 7:14 AM No comments:

Jason Harwell
I am one in a billion. That means there are 4.8 of me in China.